Over the course of the season I have been collecting scales where ever possible from fish I have landed on both the River Dee and Don. I received the reading back today from River Don bailiff, Martin Webster. 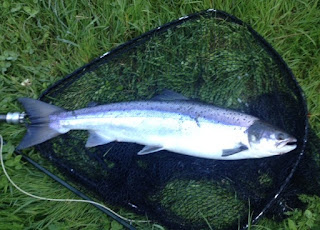 The first fish was this 11lb salmon caught on the River Don at Manar on the 1st August. The scale reading came back as follows: 2 sea winter salmon. Smolted after 2 years with good growth rings each year. 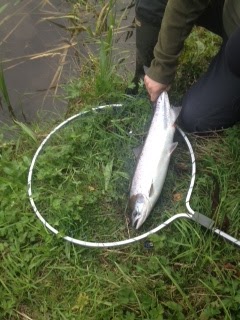 The second scale to be read came from another fresh fish caught on the 19th August from the Lower Don at Fintray. The scale read: Grilse. Smotled after 2 years and spent 1 year feeding at sea. 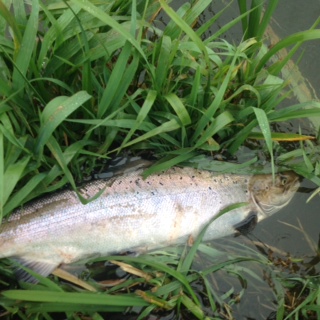 Next up was a 15lb hen salmon caught on the Lower Don at Fintray on 7th October. This fish had been in a week or two but otherwise in very good condition. Her scale read: Salmon. Smolted after 2 years and spent 2 years feeding at sea before returning to the river.

Next up was a fresh run 5lber caught on the River Dee at Ballogie on 14th October from the Bridge Pool. The scale read: Grilse. Smotled after 2 years and spent 1 year feeding at sea. 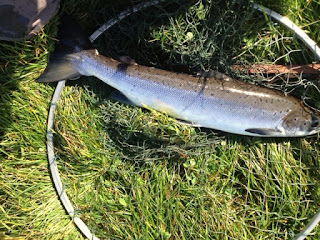 The 7lb fresh run fish was caught from the River Don at Lower Fintray on the 15th October and was covered in sea lice. The scale from this fish read: Grilse. Smolted after 2 years in river and spent 1 year feeding at sea.

There was also another scale which I submitted for reading. This was a fish I had foul hooked by accident in late August. I fly must have came across it's back as it fish round as there was one solitary scale on the point of my fly when I checked it. I sent the scale off and Martin was undecided on the reading of the scale and has sent it away for further analysis and a second opinion. I'll report the reading back as soon as I get it as the scale was very large and I had the feeling it was quite a big fish! Hopefully that will be the case when the reading comes back and I'll look forward to seeing the result..
Posted by DeeDonSalmon at 4:55 pm