This is a short video I have put together of the last day of the salmon fishing season on the River Don at Manar. Still got a lot to learn in terms of editing but reasonably pleased with the outcome of this one despite the limited footage I had to work with. Hope you enjoy watching it. Feel free to let me know what you think by leaving a comment. Cheers

Posted by DeeDonSalmon at 10:55 pm No comments:

My last outing of the 2017 salmon fishing season was on the famous Morphie beat of the North Esk. A bonus day off work due to the rescheduling of a meeting left me with a free to date go fishing. After a quick look around FishPal I stumbled across availability for Morphie. Not many salmon anglers in the UK haven't heard of the Morphie beat. It has been on my bucket list for years and as I had never even fished the Northie before, when the chance arose to take a day on it's hallowed pools, it was far too good an opportunity to miss. 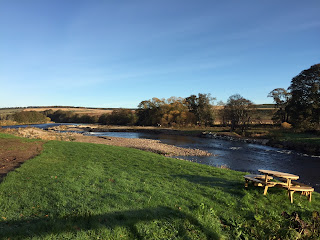 I arrived at the beat and was met by my pal Colin who was going to be fishing with me for the day. The gauge was reading 1ft 2in and was running clear. Colin had some success the previous week at Morphie and he advised that tactics for the day would be to get the flies fishing deep. I opted to fish with my Guideline H/I/S1 shooting head for the morning. My fly of choice was a small black and yellow treble.
We were drawn to fish the lower half of the beat in he morning from the left bank. Colin took us down to the parking area and rowed us over in the boat. After about a dozen casts with my chosen line I realised it was too heavy for the slower moving pools. Fishing it effectively proved to be challenging to say the least. Regardless of my line trouble, it was great to be able to say that I have fished the beat now and with the presence of plenty fish in the pools, I always felt there was a chance of something taking my fly. I fished down through all my allocated pools with only a small finnock about 1.5lb  to show for my efforts. Colin did however, manage to land a lovely fresh fish around the 5lb mark and he also lost another which was encouraging.
After lunch I decided to change lines and put on a Rio hover shooting head. This was ideal and I immediately felt much happier that it was fishing just as I wanted it to. In fact, it fished perfectly and almost immediately after lunch I had a good pull from a fish just below the dam from the left bank. It didn't stick unfortunately but it was a real boost that the new tactics were working, especially after struggling so badly during the morning session.
I carried on down the pool with a renewed confidence and when I was just opposite the hut I had a good take from a fish. I firmly lifted into what felt like a decent salmon. I got the fish onto the reel and began to play the fish. Sadly, no sooner had it taken my fly, it threw the hook and was gone. This was a big disappointment but there were plenty more fish about and I had only fished the top 50 yards of the beat.
Unfortunately, this was to be the last chance I would get during my day at Morphie but there were 3 landed for the day, 2 of which were fresh which was a decent result. Just to fish the beat was good enough for me but it would have been nice if my fish stayed on and I could have got my name in the catch book on such a famous beat.
Hopefully I'll have another chance to do so in the future but if not, then at least I can say I've fished the beat. One thing is for sure, it certainly won't be my first and last go on the North Esk. What a lovely river it is and the fishing ain't half bad either!
Posted by DeeDonSalmon at 11:45 pm No comments:

The last Saturday of the season always signals a good day's fishing at the delightful Manar beat of the River Don followed by the customary BBQ. This year was no different as my good pal, Charlie Robertson and I had one last cast in pursuit of a River Don salmon. It turned out to be a cracking day on the river.
We arrived at the beat in the morning around 9.00am and the gauge was reading 5". Not a bad height for the beat at all. The wind was blowing hard though and there were plenty leaves floating down river as a result. My set was a 14ft 9in Guideline AWM matched up with a 10/11 Guideline PT Scandi floating shooting head. Attached to this was a 10ft 3 inch per second Rio versi leader. My initial fly of choice was a #9 Kitchen Sink. A good choice for low light levels and a river full of leaves.
As I was planning to do a final Blog post of our day I decided to start at the top of the beat and work my way down from there taking photos etc as I went. I didn't actually bother heading all the way up to the Ree Pot, instead I opted to start in the Stone Pool. The Stone Pool is a lovely wee run at the neck followed by a nice, evenly paced middle before dropping down again into the pool below. I started up in the faster water and began to work my way down the pool. As I neared the middle section of the pool I was treated to a nice acrobatic leap from a small coloured grilse just about a rod length from the bank. I shortened my line and tried to cover the fish as best I could but it wasn't for tempting. It was good to see some activity early in the day though. I fished out the remainder of the pool without seeing anything else move so it was off down to the next pool.

The BBQ is always a highlight in the angling calendar at Manar but this year it there was only a depleted squad assembled to enjoy the cooking of beat owner, Ian Anderson. Charlie and I were joined by fellow Manar regular, Fred Hay and his wife as well as Charlie's wife, Liz. After a shandy and a burger it was time for me to head home. That was it for the 2017 season for us. It certainly wasn't a season many will be sad to see the back of on Donside that's for sure. I can't complain too much as I have been fortunate enough to land a fish or two for my efforts.

I'd just like to end this Blog post by taking a minute to thank Ian for allowing me to fish his beat. It's always appreciated and I'm very grateful for the opportunity to do so. I'll certainly look forward to returning next season. Roll on 2018!
Posted by DeeDonSalmon at 10:46 pm No comments: