Thanks to a last minute shout, I was offered a days fishing on the Invery beat of the river Dee last Wednesday. Invery is a beat I always enjoy fishing and has some fantastic pools so I didn't take long to accept the invitation. The river was sitting around 2ft on the gauge and was is good shape with water temperature hovering around 46f. My set up for the day was a 15ft Mackenzie Shooting Head Rod, Intermediate shooting head and a 9ft tapered leader. Fly of choice was the Sunray Shadow.

I arrived at the beat around 8.20am and met the ghillie Karl Revel at the hut along with fellow rod Craig. We were given the choice where to start and I opted to have a run through the S Pool first and then work my way down from the Signal and into Greenbanks. I started up at the neck of the pool and fished it down with a Red Frances to begin with but this didn't produce an offer so I had another run down with a Sunray Shadow this time. Again, it didn't attract a fish so I made my way up to the Signal to give it a go. 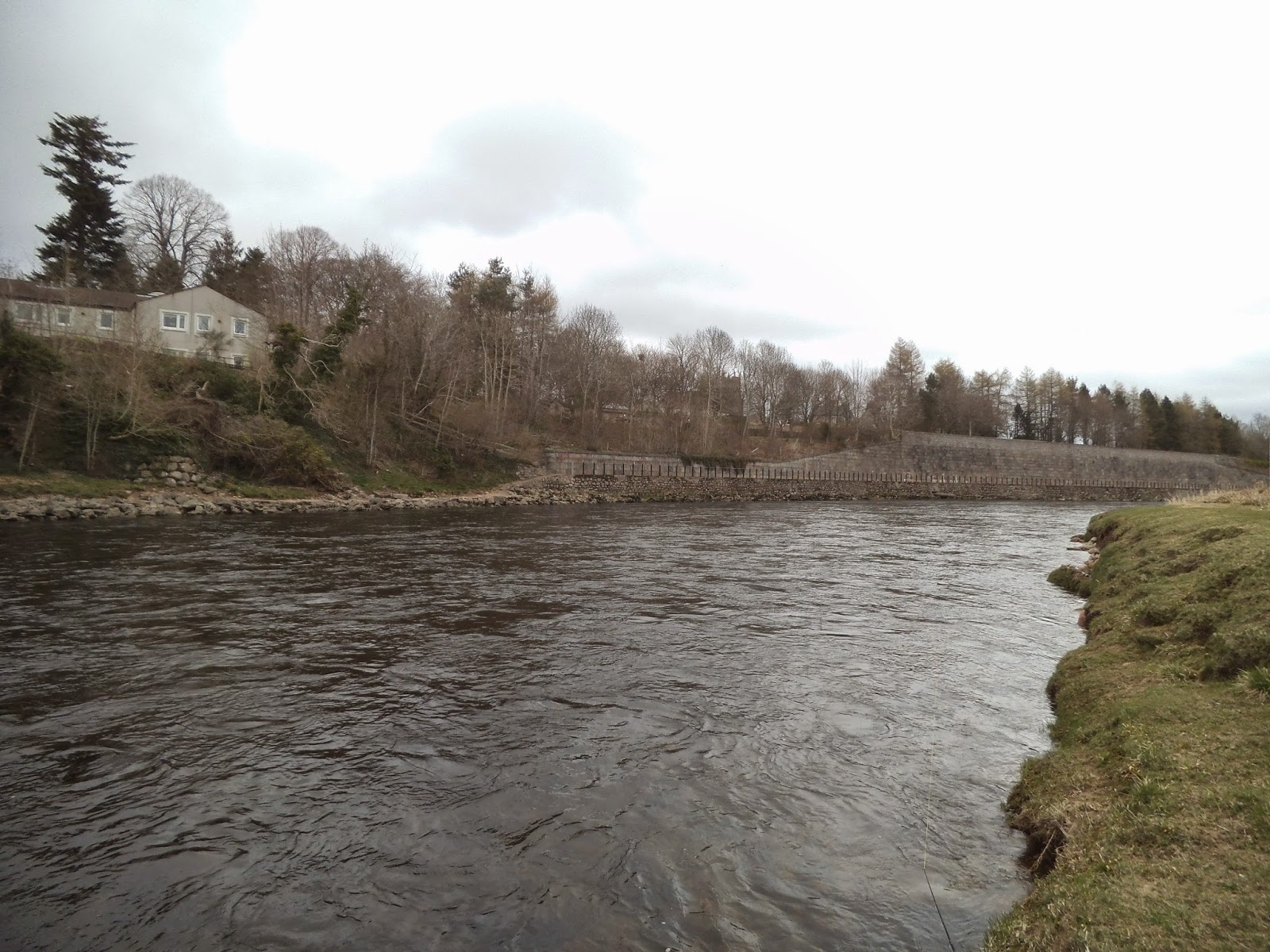 On my way up to Signal I stopped to chat with Craig who said he'd had hold of a fish on a Sunray Shadow which sadly threw the hook. This was encouraging so I was eager to get going. I started right at the top of the beat and began to work my way down, concentrating on the areas Karl had said were the most likely spots. There were one or two fish showing just down from the beginning of the wall but I covered them several times without a take. As well as the pool was fishing it proved to be a fruitless run through it so I made my way down stream a little to have a cast in the Greenbank.

Not long after starting in the Killing Hatch I spotted a fish show just downstream from me. I couldn't really see if it was a fresh fish or not but at least I knew where a fish was lying. I made my way down the pool with a Sunray Shadow and as I was level with the burn mouth my fly just stopped. I was stripping it slowly so I pulled on the line as normal and this seemed to wake the fish up! It made one or two short runs but I soon had it beached and it turned out to be a very well mended kelt. Not the springer I was after but at least I knew my tactics were working. I fished the rest of the pool and into Greenbanks without and offer so I headed off down stream to have a crack in the Jetties before lunch.

The Jetties as this height required a long cast to get into the likely areas so I stripped plenty line off my reel and fished my way down the pool. I saw a fish show just out in the streamy run so I covered it a few times but it didn't take. It showed a few minutes later and it appeared to be a kelt anyway but it's a good sign that kelts are in the pool just to help slow down the running springers.

At lunch time my pal Paul appeared for a cast and after swapping stories and with fellow rods and Karl it was time to get going again. I was allocated the lower part of the beat along with Craig. Craig started in the Floating Bank and I started in Pantoch. We were to swap over mid session.

As I arrived at the Pantoch pool I spotted a fish show about mid river. This was followed by another soon after. It looked as though they were sea trout. Not like the kelt that have been around of late as these were short stocky looking fish. I fished through the pool first with a #7 Kitchen Sink and then second tIme down with a Sunray Shadow. Neither run through the pool produced anything so I made my way down to have a crack at the Floating Bank.

The Floating Bank is up there as one of my favourite pools on the beat. It is a classic fly pool which fishes very well. There are usually a few fish lying in this pool and today was no different. As I made my way down the pool there were fish showing down it's whole length. They were howerver, what looked to be kelts and they didn't seem interested in what I had to offer. I fished the pool from top to bottom without a touch. Maybe the bright, sunny conditions were putting the fish off. I made my way back to the hut at 5pm to say goodbye to Karl and thank him for his advice. Karl suggested we fished on as the sun was now cooling down a bit. I decided to give it a few hours so I made my way back up to the Signal whilst Craig and Paul headed off downstream to fish the lower pools again.

My evening didn't produce any offers unfortunately and I called it a day around 7pm. At least I got a bend in the rod from a kelt and there were a few other kelts caught through out the day also. Just a pity that springer didn't stick for Craig in the morning. That would have been a good start to the day for him. It's a fantastic beat and has plenty pools to keep you occupied all day long. Each has their own characteristics and charm and they all produce fish from opening day until the last day of the season. The ghillies, Karl and Jim are great lads too and are always eager to help the vising anglers giving advice when needed and to point out the likely spots where fish can be taken. I will hopefully be back one day for another cast on at Invery in the future.

Posted by DeeDonSalmon at 8:13 pm