Another salmon fishing season has come and gone but as usual, it has been a full of memorable days spent on the river bank. In fact, is there a such a thing as a bad day spent fishing and enjoying the countryside? I'm not sure there is.
On a personal level, my season went pretty well considering the doom and gloom surrounding salmon fishing at the moment. I had a decent season catches wise for my efforts but what was really pleasing was the average weight of fish caught. Out of 20 salmon landed, the average weight was 10.1lbs. I can't wait to do it all again in 2018 but in the meantime, please enjoy reading about my season's run down and some of the highlights of 2017. 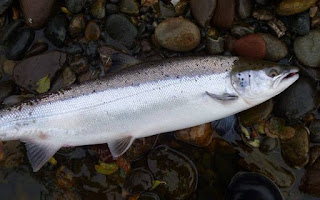 My season started off with an opening day outing on Tayside to fish at Murthly 2. This was quickly followed by another day on the Tay at Lower Kinnaird. My good pal, Bill Cook was in the right place at the right time to land a lovely January springer of around the 9lb on the fly.
The opening days of the River Dee salmon fishing season were spent on the Park beat with Philip Black and Sean McGarry. We didn't have to wait long for the first fish and once again, Park produce the biggest fish on opening day for the second year running with a 14lber from the Cellar Pool caught by Philip's son-in-law. It was his first ever salmon. Not a bad way to opening your account!!
My first fish of the season came on the 3rd February from the Cellar Pool. It was a beauty of around 10lb and was taken on a 1 1/4" Monkey tube. I landed it shortly after Sean McGarry returned a belter of around 16lb from the same pool. Hopefully we have the same good fortune at Park when we return in 2018 for the opening days again. 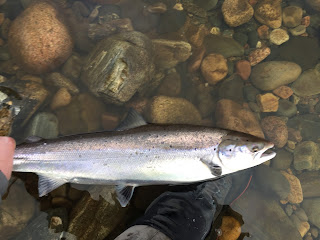 My second fish of the season was caught during a flying visit to Ballogie on St.Valentine's Day where I was fortunate enough to land a nice springer around the 7lb mark from the famous Bridge Pool. It was taken on a Willie Gunn tube. I lost another not long after landing this fish. Not bad for just 1 hours fishing!
March saw my annual three day trip to Desside to fish the Ballogie beat. I had a great trip this year and managed to land three lovely, fresh fish for my three days. The first came from the Bulwarks and this was followed by 2 springers the following day from Lower Inchbare. All three were take on a Monkey fly.

My good run continued and I was lucky enough to land another fish during a short stint on the Dee again but this time at Carlogie. There was a good run of fish entered the Village and Boat pools as I arrived at the beat and within three or four cast I struck silver with a nice wee fish of around 6lb which was expertly netted by ghillie, Sean Stanton. Again, the Monkey did the damage.

Probably the top highlight of my season was landing an absolute brute of a springer from the River Tay at Stobhall on the 24th March. It was hooked in Tam's Corner on a 30g Copper Salmon lure. It was weighed in the net at exactly 20lb and was covered in sea lice! What a feeling landing such pristine looking springer in March whilst in the company of legendary Tay ghillie, Bob Anderson.

Although I didn't land any fish during the month of April, a particular highlight of mine has to be our annual day on the River Spey at Tulchan. The Spey is a magical place any time of year but when the fish are the quality of the ones my pal Philip landed then it makes it all the more appealing. Looking forward to returning again in 2018 for hopefully more of the same.

I had to wait until 4th July for my next salmon to be banked after a spell of loosing a few fish prior to landing this one. A memorable loss was a fish hooked during the evening in June at Ballogie. It was well into the teens of pounds and after a hard, dogged scrap it manged to evade capture by taking my line round a rock and snapping the leader. Still, the fish pictured was more than welcome and it was also the first fish I had landed on Commonty for a while too. It weighed roughly 9lb and was caught using a small fly on light tackle. My pal Philip also landed a nice brace of fresh fish that day too.

Another stand out from my 2017 season was the experience of catching a salmon on the hitch fly. I was introduced to this exciting method by Sean Stanton during an evening on the Dee back in June. The takes are so visual and watching the fly skate across the surface only to then get engulfed by a salmon is a sight to behold. The fish pictured above was caught during a lunchtime cast in the bright sun but it couldn't resist the hitch tube. The hitch is certainly a method I will be using much more of in 2018.

Again, not a salmon caught by me but the image of this salmon is wedged in my mind. It was a perfect specimen of a summer salmon and was caught by my good friend, Charlie Robertson during a day on the Dee at Carlogie in July. It was landed from Jock Rae almost immediately after he had released a smaller fish minutes before.
Not the biggest or prettiest fish I've ever caught but this was my first salmon of the season from the River Don. A lively grilse about 6lb taken in a peaty water from the Upper Wood pool at Manar. A small Cascade doing the business this time.
Fishing isn't always about catching fish and during the summer I made a visit to the famous Cairnton beat of the River Dee. Cairnton was made famous by A.H.E Wood as it is where he perfected the "greased line" method of fishing and also where he caught upwards of 3000 salmon to his own rod over the course of his tenancy there. A tour round his old rod room was a particular highlight of the day and it was fascinating to see his old flies and rods but especially the old catch records.

My next memorable fish was an 18lber I caught from the Boat Pool at Carlogie in August. The water had went up the night before and was heavily peat stained. There was two fish landed in the morning and there seemed to be one or two on the move through out the day. Despite this, I didn't have a touch until after 6pm when I had a thumping take from a hefty fish just under the wires. It made some awesome runs and it certainly got a good tune out of my Hardy Cascapedia reel. It took a UV orange and black snaelda fished deep. Was a good way to sign off my day.
By the time September came round there was a distinct lack of fresh fish evident in all rivers. Having said that, the pools were stacked full of older fish but getting them to take was a complete different ball game. It was so frustrating knowing you were covering fish on every cast but nothing you presented to them made them want to take. I did manage to strike lucky a few time though and was fortunate enough to land a couple of beauties during a few hours visit to the Dee. One was conservatively estimated at 12lb and the other 15lb. Again, it wasn't really the quality of fish that was pleasing, it was more the size of them. Good sized fish seemed to be more abundant than the smaller grilse were.

Another particular highlight was finally landing a salmon from the Aberdeen and District Angling Association water on the River Don. I hadn't really spent much time on the club water this year but after a good rise in levels I ventured out for an hour or two and managed to tempt a grilse from the tail of the Dooker pool. It was also pleasing to land another Don salmon.

October is usually the most prolific month for me in terms of catches and this year was much and much the same as previous years. I had some good days on the river and a couple of fish in particular stand out. I was fishing the Dee at Ballogie and started my day off in the Top Gannets. I had only made about three casts when I landed an old cock fish of around 7lb. It was quickly released and I made my way out to the same spot to recast. My very next cast in the same lie produced another take but this time it felt like a much bigger fish. After a dogged scrap, a cracker of around 18lb was beached. Both fish were landed before 9.30am and both were taken on a Black Snaelda. Apart from a lost fish just before 5pm that was the lot for my day but it was good to sign off my Dee season with a couple of salmon.
The last Saturday in October signals the end of the salmon fishing season for most of us who work during the week. At Manar, this day is always when the BBQ gets fired up and we celebrate another salmon fishing season coming to an end. I fished the beat from top to bottom that day as I wanted to make a short video showing off the beat and what the pools were like etc. I had fished the entire beat bar the Chapel Pool without a touch but the Chapel Pool is always a good bet to produce the goods. I was about half way down the pool when I had a thumping take! It took off like a rocket and it became apparent that this was a good sized fish. After a hard fight, I managed to beach the fish and, going by measurements and taking into account the large kype etc I estimated it to be in the region of 18lb. The fish was quickly returned and what better way to end my Don season than with an 18lber. Just like I signed off the Dee season.
My final highlight of the 2017 season was my first ever trip to fish the North Esk where I fished the Morphie beat. This beat is well known to many anglers due to the prolific catches it is capable of producing. Sadly, I could only lose a couple of fish that day but it was great to say that I have fished on such a hallowed stretch of water and to finally have fished the North Esk.

The close season is time to tidy up the gear and refill the fly boxes ahead of the new season arriving again in spring. I have some good fishing planned again next year and have been busy at the vice tying up my favourite patterns in preparation for this. I'll look forward to sharing my stories for anyone who is interested in following my fishing season as it progresses. I'd just like to sign off this post by thanking all my pals who I share my days on the river with and to the ghillies who have helped make this another memorable season. Here's to more of the same in 2018! Tight lines.
Posted by DeeDonSalmon at 3:46 pm