Last Saturday I was fishing on the Middle Blackhall beat of the River Dee with good pals Bill Cook and Philip Black. We were due to fish the Tay but after a last minute change of plan due to unforeseen circumstances, we decided on fishing the Dee instead. This was a new beat for me as I had never fished here before. The river levels have been very low recently and the rain forecast prior to our day unfortunately never materialised and levels were sitting at around 4" on the Woodend gauge. Given the conditions, my set up for the day consisted of a 12ft 6in Guideline LPXe #8/9 with a floating Rio Scandi shooting head and a long tapered leader with 6ft of 10lb nylon. 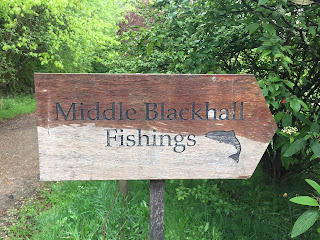 As the water was so low we arranged an early start with the ghillie. We arrived at the hut around 7am and had a good chat in the car park as we tackled up. Bill then produced a nice bottle of single malt from his recent travels to Arran which accompanied our discussion nicely. After a small dram we made our way to the hut where we were greeted by head ghille, Brian Brogan. We chatted away with Brian for a while and were allocated our pools for the morning session. We must have enjoyed the craic as before we knew it, it was 9am. So much for our early start then!


I was to start in the Invercannie pool first of all. Brian pointed out all the areas to concentrate on and it wasn't long before a fish made it's presence known. I tied on a #14 Silver Stoat's Tail and worked my way down the pool. Using such small flies made them a free offering for the countless amount of smolts present. Every cast and it was getting nibbled by these young salmon. It was great to see such vast numbers of smolts in the pools. Hopefully this bodes well for future stocks. I fished down the pool with just a brown trout and a dozen smolts for my my efforts so it was off upstream to fish the Rock Heads.

The Rock Heads was a short pool but an ideal resting point given the fast water below. The fish have to negotiate a steep incline from the pools below whilst battling the fast flowing white water so it's easy to see why this pool would be productive. I covered the whole pool from top to bottom but again, just a few greedy smolts took my offerings so it was off back down to Invercannie for a second run through.

My second run through Invercannie produced the same results as my first run. Philip joined me as I fished out the remainder of the pool but there seemed to be a few more active fish this time round. Possibly due to the heavy rain which was emptying from the clouds above us. Maybe the salmon could sense a wee lift in water coming? Or maybe I'm just over thinking it? Who knows but there weren't for taking my fly anyway so we headed off back to the hut for lunch.

The Middle Blackhall hut is a cosy timber clad granite building and is quite comfortable inside. The good sized wood burner roared away nicely but more to dry our soaked gear than to warm us up. There was nothing to report from either Philip or Bill but we all commented on the number of juvenile fish about. It really was a sight to see so many feeding hard as they prepared for their epic journey. Hopefully a good number of these youngsters will return in the next year or two as adults and give us anglers a chance to catch them.

After lunch I was to fish Sandy Bay and Canary pools. There had been a nice, clean fish lost in here the previous day so I was raring to go even though Bill had fished it during the morning session. These pools were a couple of nice fast runs and exactly where you would expect to pick up a running fish given the low water conditions. I changed fly to a small #12 Executioner and fished my way down the pools. Not long after starting, my phone went and Bill had just landed a nice clean fish of around 7lb from Invercannie. this was good to hear and kept the concentration level high. Despite my best efforts in the pouring rain, nothing wanted my fly except one or two juvenile fish again so I headed of further upstream to fish Glisters.

Glisters is quite a narrow pool at the neck as the river flows through the bedrock banks on either side before widening out into a nice streamy glide. Like most of the pools on the beat, this was holding a lot of juvenile fish. In fact, the slower parts of this pool were literally bubbling with them! There were numerous amounts of them airborne at any given time as they feasted on the abundance of flies obviously on the water. I fished down the neck of the pool without a touch so decide to head further upstream to fish the Cairnton Pool.

The Cairnton Pool is a lovley stretch of water which is overlooked by the big house on the Cairnton bank. I made my way down to the water and a good, clean fish showed just below where I started which spurred me on a bit. I opted to try a bigger fly to eliminate the chances of hooking the smolts so I tied on a #11 Crathie. With the low water conditions, this pool only required a very short cast to cover the run which flowed through the middle of the pool. This is where the fish seemed to be lying and I covered them as stealthy as I possibly could. There were a couple of older fish which showed half way down and these could have been  disturbed by the presence of running fish. Neither the old stuff or the fresh fish wanted to take my fly and I fished out the pool without a touch just as Bill arrived to say he was heading off. By this time it was 4pm so I decided to head back down to the Invercannie for another go.

My third run through the Invercannie was a fruitless one but a few more fish showed as I fished down the pool. It certainly seemed to be holding a few salmon but tempting one, for me anyway, was proving to be a difficult task. I fished out the pool without a touch but by this time the rain had finally stopped and the sun was splitting the sky again.
I made my way back to the hut at 5pm to meet Brian as he was shutting up for the weekend. We had a good chat and I listened on intently as Brian relaid stories of his days ghilling on the River Tay at Islamouth. Brian's tales of large fish and huge bags of salmon had me imagining what it must have been like in those days. It must have been amazing to see the rivers stuffed full of fish, and some very large specimen fish at that! Hopefully one day salmon numbers will again be at that level and I hope to be on the river when they are!

Brian suggested having another go in the Cairnton pool as his rods on the Cairnton bank had seen a few fresh fish moving in it earlier on. This is what I did and I headed off upstream. I started at the top of the pool and worked my way through it covering all the lies where I saw fish when I fished the pool earlier in the afternoon. Nothing was showing this time around and I fished out the pool without a touch and decided to call it a day just before 7pm.

I really enjoyed my day on Middle Blackhall despite the low water. The beat is set away from the major roads and is very secluded given anglers a peaceful setting to cast a fly. It also has to be one of the best kept beats on the river as both banks are maintained to almost bowling green like standards! There was also the added bonus of having pools with plenty fish showing through out the day. This kept us occupied and it was good that Bill managed to winkle one out. It was also good to see a part of the River Dee that I had never seen before. I will certainly be back and I already have a day booked on the opposite bank at Cairnton in July which I'm really looking forward to. For more info on the beats or to book a day click on the links below.