I was grateful to ghillie, Martin Robson for inviting me over to fish on the delightful Little Blackhall and Inchmarlo beat of the River Dee last week. The river was dropping away nicely after a rise the day before and was it carrying a peat stain. The river was sitting at roughly 1ft 4" on the Woodend gauge so tactics for the day were my 14ft Hardy Demon, floating line and a 10ft slow sink tip. My fly of choice to begin with was a #8 Cascade.
I arrived at the beat about 8.30am to be greeted by Martin and his springer spaniel, Fly. We discussed the current conditions over a cup of coffee and we planned out our tactics for the day ahead. Martin suggested we start off on the upper part of the beat and fish the Otter Stone down to the Laird's Cast covering all the usual lies as we went along. I started up in the Otter Stone whilst Martin fished the Fawn.

The Otter Stone is a nice bit of water and is often a good bet to pick up a fish or two in such conditions. Martin pointed out all the recent hot spots and where fish had been holding before making his way down river. I started off as I normally do fishing a short line and lengthening it out to a full cast before working my way down the pool. There were a few fish showing further down the pool and every now and again there were splashes upstream. The fished just seemed to be bombing through with the good water and occasionally showing themselves on their way by. It was good to see decent number of fish though and there is always a chance if your fly is in the water as they pass by. Unfortunately, I didn't temp any of them to take my offerings so it was off down to the Fawn.
The Fawn is a cracking part of the beat and there were decent numbers of fish showing in here as they came through the white water below. I covered the pool as best I could and concentrated on the areas where the fish seemed to be showing the most. Try as I might though, nothing took any interest in my fly but again, it was pleasing to know I was covering fish. I just needed to figure out a way of getting one to take my fly. Easier said than done sometimes though!
As there were a good few fish moving through the beat I decide to go back up and fish down through from the Otter Stone again in the hope I might intercept one of these running fish. All down the length of the pools there were fish showing every now and then but they just weren't interested. I tried heavier flies, small flies, fast sinking tips, full floating line but nothing would slow them down and take my fly. By this time it was nearly lunch so I made my way back to the hut for a bite to eat and to catch up with Martin and find out how he was getting on.
After lunch Martin thought it would be a good idea to fish from the Little Blackhall bank and cover the areas where the fish were lying in the Otter Stone and Fawn. Just really to give them something else to think about with a fly coming past at a differnet direction and angle. There were still one or two fish splashing about in these pools and we were confident that we were covering fish with every cast. I changed tactics and opted for a Sunray Shadow fished off a 10ft fast sink tip. Despite this confidence and the change of tactics, the results were the same as the morning. The fish seemed to have other ideas and we just couldn't temp any salmon although we each had encounters with greedy brown trout.
The famous Roe Pot was next up and we crossed back over to fish it from the Inchmarlo bank. The afternoon was wearing on but there were a good few fish splashing about. I thought about changing tactics but decided to stick it out with the Sunray Shadow, purely just to try and induce a take from one of these fish. I cast it out square and stripped it back at various speeds and covered most of the pool in this way. I still couldn't get a fish to take my fly. It was very frustrating but at least I knew I was covering fish as I went through the pool and it was very pleasing to see such decent numbers of fish moving through the Dee again.As was the same the previous week when I was fishing at Carlogie. Time got the better of me and I had to call it a day at 5pm as I had other things to do in the evening. Although, looking at it again now, the evening might just have been the best bet for getting a fish. 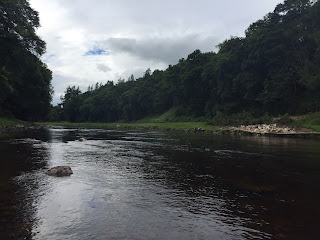 The invite from Martin to fish here much appreciated. It was good to be out fishing at Little Blackhall and Inchmarlo again as it's a beat I always enjoy fishing. It was also good to see plenty fish around too. Catching them on the day proved difficult but Martin will do his utmost to put you onto a fish and with scenery and surroundings as nice as anywhere on the Dee, it really is worth having a go here. Current prices are only £45 per day and you certainly can't argue with that for a day's salmon fishing. For detail of the beat follow the link - Little Blackhall And Inchmarlo
Posted by DeeDonSalmon at 8:41 am