I had my first salmon fishing outing of the 2016 season last Saturday on the Lower Kinnaird beat of the Mighty River Tay. January fishing is not for the faint hearted and the cold temperatures only attract the hardiest of anglers who are eager to blast of the cobwebs of the long close season. The chances of landing the coveted prize of a January springer are slim at best but it's the feeling of being out on the river again clinging onto that slimmest of chances than keep us coming back.

With the alarm sounding at 4.45am I was up and raring to go in anticipation of the first cast of 2016. My pal Bill and I traveled down together and we were to meet fellow Salmon Proboard Forum members, Kenny, Alan, Andy and Craig at the Ballinluig services just a 5 minute drive from the beat. After a good catch up over a bacon roll it was off down the beat.

The water was sitting at around 3ft on the gauge but was running clear and was looking in great shape. Martin, the head ghillie paired us up and I was was to fish with Kenny where we were to start off in the Ash Tree pool then the Guay Pool after lunch. We headed off to the river and on arrival to the Ash Tree pool I realised just what a fine part of the Tay this was. It looked like fantastic fly water at this height and Martin assured us that it is even better with a couple of feet less on it.

Kenny and I fished down the Ash Tree pool having to contend with the rod rings freezing with every cast as well as ice freezing the reel solid. Despite this I did see a fish head and tail near the bottom part of the pool and not long after Kenny hooked into a fish. After a spirited fight in the faster water Martin tail out a well mended kelt which would have been a very good fish when fresh. this was to be the only action from either of us during the morning session and we headed off back to the hut around 1pm.

During the build up to our trip to Lower Kinnaird there had been numerous messages exchanged and lunch was high on the agenda. Kenny was bringing some famous steak pies from a baker he knew so I offered to bring the beans! It was all good craic and I think the lunch was built up more than the fishing. We sat down to a very welcome hot lunch in the well equipped hut and Kenny's pies, just like he said they would, went down a treat. There had been a few kelts caught during the morning with nothing fresh seen but at this time of year it's just a matter of searching for the proverbial needle in a haystack. If the fly or lure is not in the water then you haven't got a chance so we were keen to get going again.

After lunch Kenny and I were to fish another fantastic looking pool, Guay. This was more of the same in terms of fly water and looked every bit as fishy as Ash tree did. Kenny and I took turns in following each other down the pool and apart from a half hearted pull on my Black and Yellow tube around 3.30pm there was nothing to report so called it a day just after 4pm as the temperature and snow started falling rapidly.

Back at the hut there was nothing else to report from anyone in our party as the freezing temperatures mus have put the fish off the take. We enjoyed a good laugh over a hot cup of coffee before saying our goodbyes and heading our separate ways again. 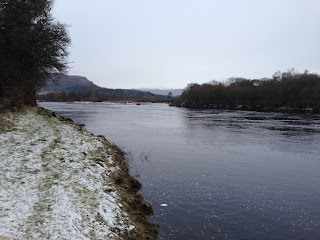 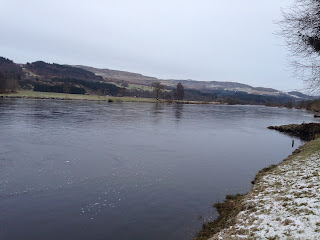 I always enjoy these Forum meets in January. It's a great way to get everyone together again after the long close season and with the home brewed Sloe and Damson gins ready for sampling too then it's well worth the effort. We all keep in contact through out the year and banter is always good but nothing beats meeting up in person to have a cast on some of the nicest rivers in Scotland. Looking forward to our next trip to Castle Forbes on the River Don in April. I stupidly dropped my camera in the river just before I finished up for the day so I'd just like to thank Alan, Kenny, Craig and Bill for kindly sending me and allowing me to use their photographs as somehow the memory card in my drowned camera was blank! Thank you gents, much appreciated. 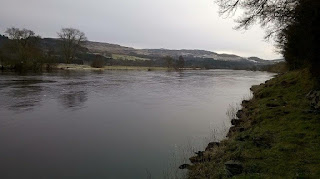 For more information on fishing the River Tay at Lower Kinnaird have a look at the their website by clinking on the link.
Posted by DeeDonSalmon at 9:17 pm