I had a day on the River Tay at Dunkeld House last Saturday thanks to my pal Paul Pritchard. We were to fish from the boat with ghillie for the day, Jim Ferrie. Heading down to Tayside involved an early start and the alarm was set for 5.30am. The prospect of catching a Tay salmon made sleeping the night before almost impossible but I couldn't wait to get down there. On arrival in Tayside, the rain was pouring down and there was a lot of water lying on the roads which was dirty and we feared the worst as we arrived at the river. We were soon assured that conditions were perfect and the water would be fine until at least late afternoon so we got our gear set up and ready for action. 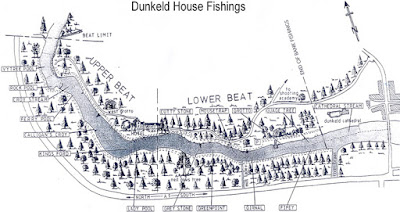 As we were both fishing from the boat, Jim suggested that one of us spin and the other fly fish. I didn't mind spinning as I had my own spinning tackle with me so I set that up and tied on a copper 30g Toby Salmo to begin with. Paul's set up consisted of a floating line with a type 7 sink tip and a #8 double so after a cup of coffee we were ready for the off.
We were to fish the Lower Beat in the morning and Jim took us down to our first pool we were to fish which was called the Girnal. Not long after arriving in the pool we saw several fresh grilse showing near the tail which looked like running fish so Jim positioned the boat and we began casting across the pool. We must have only fished about 50 yards of the pool when Paul had a good, solid offer on a #8 Bann Special. Unfortunately for Paul, it didn't stick but it was really encouraging to have an offer so soon after starting and this gave us plenty confidence. We fished our way down the pool and although we saw a few more fish showing we just couldn't temp any others so it was time to head off downstream to the next pool.
The next pool down was the Gauge Pool and the Grotto. Jim was confident we would see fish here and he was right. We saw quite a few in fact but try as we might, we couldn't find one in a taking mood. It was good to see plenty fish showing though and Jim guided us through the pools expertly. His knowledge of the beat was first class and he made sure we were fishing the right areas to give us the best chance of a fish.
The last pool were to fish before lunch was the Cathedral Stream which is named after the famous Dunkled Cathedral which lies on the bank of the pool. Although quite quiet at first, there was soon a few fish showing on both sides of the pool. Paul covered them with the fly whilst I continued with the Salmo. After 20 minutes or so, Jim changed my lure over to a Vision 120 lure. These are similar to a Rapala and swim just under the surface. Jim thought these prolific lures might just provoke a fish to take as they ran the pool. Despite our best efforts, neither of us could temp a salmon to take our offerings and it was time to head back to the hut for lunch and to dry off!

As we met for lunch, it was good to hear that a nice fresh 3lb Grilse had been landed by one of the rods from the Ivy Tree. There was also news of several lost and quite a number of offers so it was pleasing to hear. After listening to all the action that was had in the morning we were all eager to get going again and we were soon back in the boat and heading off to our pools for the afternoon.

The first pool we were to fish in the afternoon was the Lady Pool and work our way down throughout the afternoon. I had set up my fly rod but decided to stick it out with the spinning gear as I thought though would give me the best chance of hooking into a fish. As we made our way down the pools we saw numerous fish showing all the way down a far as you could see. Paul and I were delighted to see so many and confidence was sky high! Once again, Jim positioned the boat in the most likely areas and guided us through each bit of water stating the depth and how to fish it effectively. This help enormously as the Tay is such a vast river and any knowledge like that is always welcome.

By late afternoon we were down into our final pool for the day which was the Mouse Trap. Jim had told us that this pool was about 20ft deep and we needed to be getting down the fish. Jim fished the pool as well just to maximise our chance of connecting with a fish. Time was beginning to wear on and just as we were thinking of packing up for the day a fish took Jim's rod and it was over to me. It  tried to stay deep and I was as hard on it as I dared. The fish was giving a very good account of itself and made several strong runs. It was also underneath the boat on a couple of occasions but after several minutes I soon had the fish up on surface ready for the net. It was a nice fish around the 10lb mark and Jim did the hounors of netting it. After a quick photo it was safely released back into the Tay and that was as good a time as any to call it a day and we head off back to the hut. This turned out to be the 200th salmon landed this season for Dunkeld House. A fantastic achievement by any standards as it only just into July.
I have to say, whether we caught fish or not, it was a great day on the River Tay. We saw loads of fish it every pool and I thoroughly enjoyed it. Jim made the day even more enjoyable with good banter and he was only ever willing to share his vast knowledge of the beat. He did is utmost to get us a fish and tried everything to do so. I must thank Paul once again for his kind generosity for asking me to fish with him which I am very grateful for. I will be back to fish Dunkeld again that for sure. It was a lovely beat despite the heavy rain and very accessible from both bank and boat. It was good to land my first salmon of 2015 as well as my first ever Tay salmon and as for having the privilege of landing their 200th salmon of the season, that was just the icing on the cake!
Posted by DeeDonSalmon at 10:55 pm