Having never cast a line during January before, I had planned to fish the Friday and Saturday of the opening week on the River Helmsdale. However, with the recent gales, blizzards and heavy snow making for some dangerous driving conditions, I decided not to attempt the 4 hour journey. Instead, I ended up on Tayside thanks to a last minute invite from Andy Pelc. The opportunity to fish the Mighty Tay was too good to refuse and it gave me the chance to see what my new 15ft Mackenzie shooting head rod was capable of. 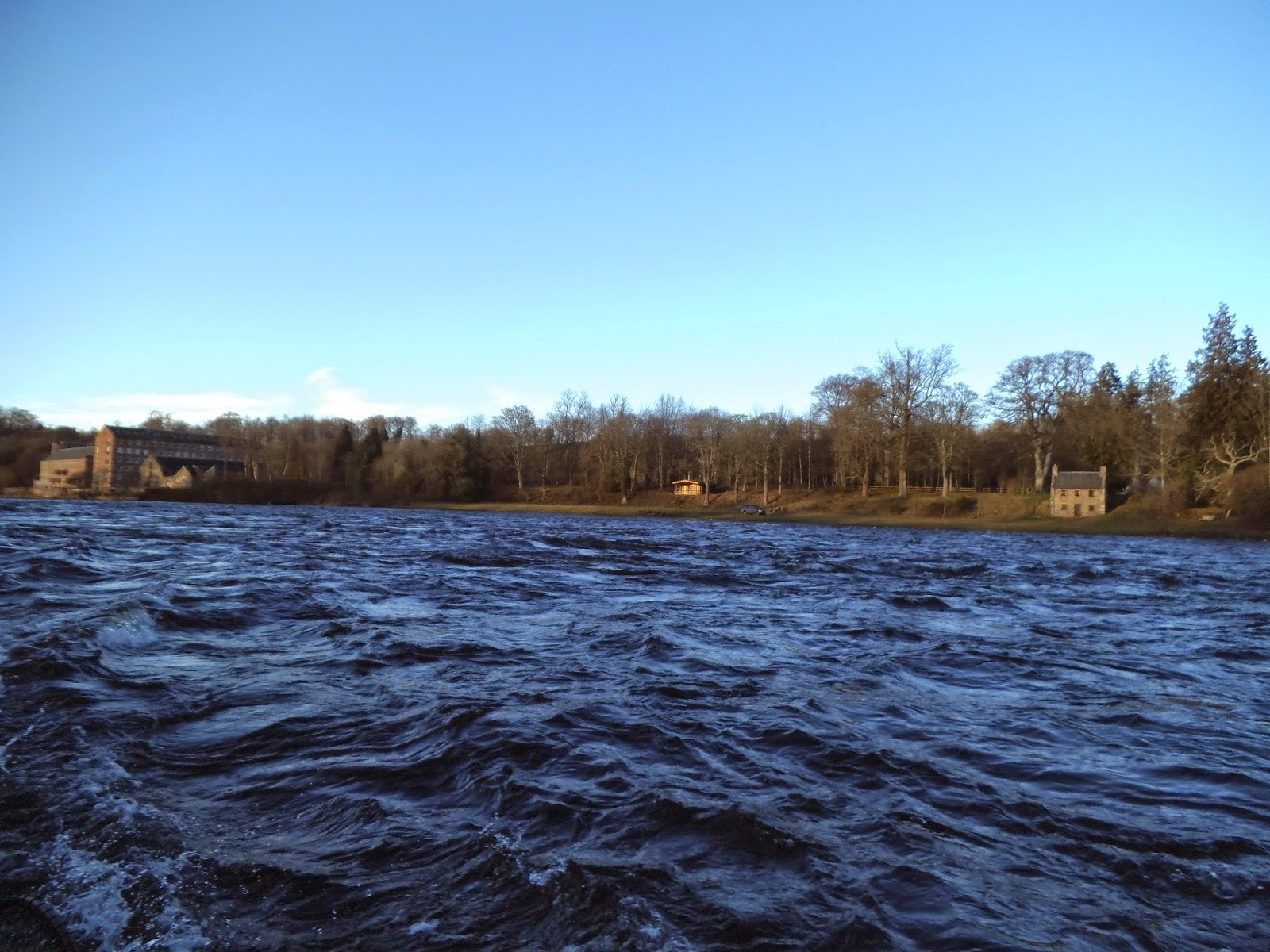 After a 2 hour drive, I arrived at the Tayside Hotel in Stanley where I was to meet Andy along with fellow pro board forum members Bill, Kenny, Alan, Malcolm and Craig. It's always good catching up with lads from the forum on the river as it's always good craic. 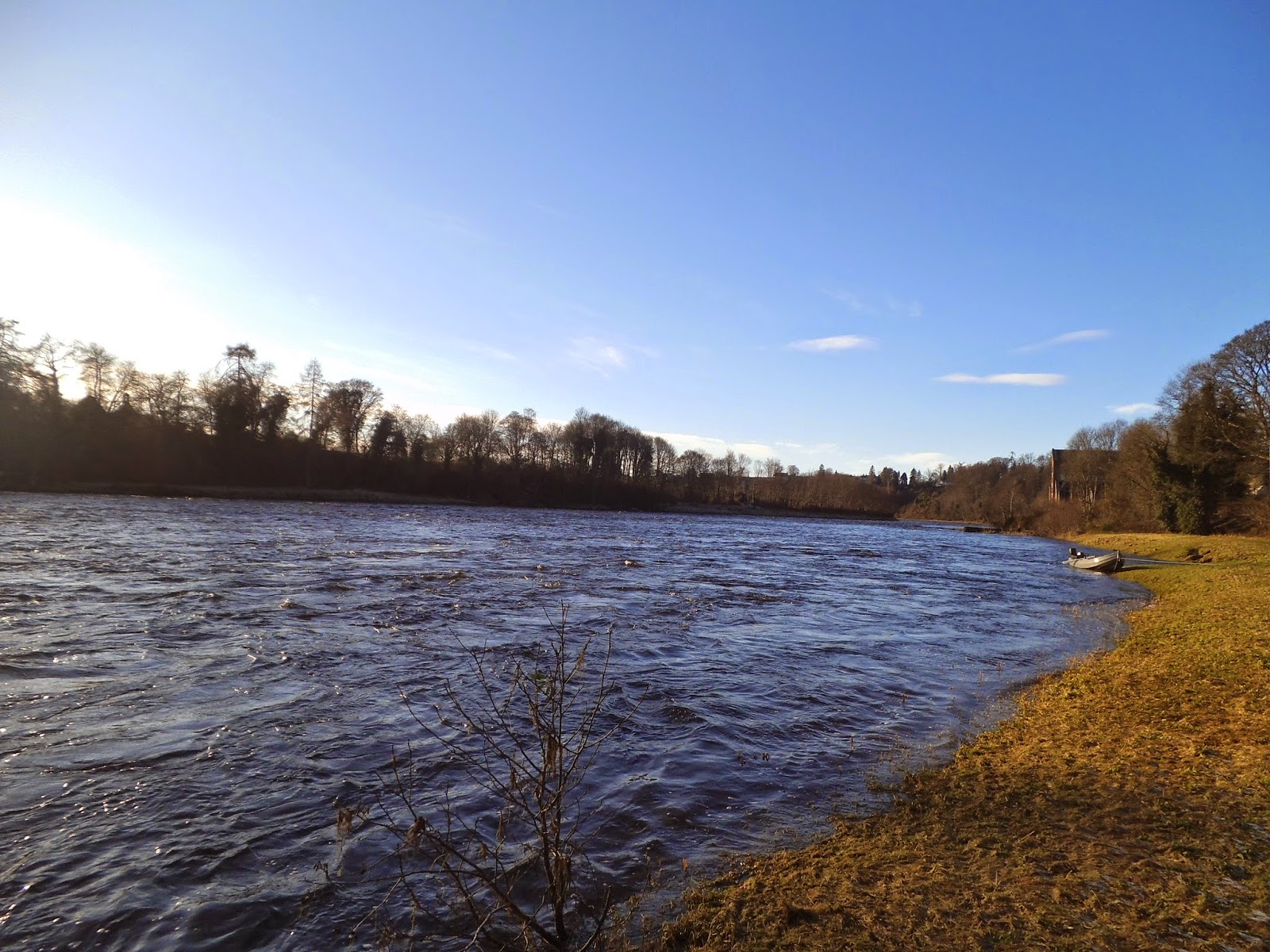 We made the short trip down to the beat where we were met by head ghillie Bob White and his underghillie Calum. Bob informed us that the water height was sitting around the 7ft mark and dropping. The water temperature was just a tad above 37f. Bob briefed us on the tactics suitable for the day and told us where we would be fishing for the morning. I tackled up with a Mackenzie intermediate shooting head and a 10 ft super fast tip. Fly of choice was a 1" brass Cascade Snaelda with a tungsten cone head.

Kenny, Bill, and I were to fish the Pitlochrie pool from the left bank whilst Malcolm fished it from the boat on the opposite side. The Pitlochrie pool is a huge bit of water but was at a good height to be fished off the bank. Kenny started at the top of the pool whilst Bill went in below him. I slotted in about a third of the way down the pool. I started fishing a short line and gradually lengthened it until I was throwing a fairly long line across the pool.
I couldn't have had any more than 3 or 4 casts when I had an offer. The fish didn't seem to do much so I didn't either. Just as I started to move the rod, the fish began to shake it's head. I firmly lifted into it but it was only on for about 20 seconds before coming off. I'm pretty sure it was just a kelt anyway.

We did see one or two fish show and apart from landing a small trout, that was it for the morning. Malcolm had brief contact with a fish from the boat and so did Calum but nothing was landed from the other bank either. Calum picked us up in the boat just before 1pm and we headed off for lunch.

During these kind of trips, lunchtimes are always fascinating. Everyone shares their experiences and observations of all thing salmon fishing and I never get bored of listening to stories about prized catches or the strange methods of which salmon have been caught. Before we knew it, it was 2 o'clock and time to get going again.
I was to spend the afternoon out in the boat with Andy and Bob doing a bit of harling. This was something I had never done before so was keen to give it a go. Harling involves using three rods fishing lures out the back of the boat. The boatman uses his skill of the boat and knowledge of the pool to work the lures over the lies. This method of fishing is almost unique to the Tay and is a very effective way of catching salmon.

Not long after starting in the Wash house pool, the middle rod had a fish on and was handed to me. After a dogged scrap, a well mended kelt was soon in the net. Not the springer we were after but never the less, it was good to get a bend in the rod after the close season. We gave the pool a good going over before heading up to harl the Pitlochrie pool. Although we were sure to connect with at least a kelt, the fish had other ideas and we didn't get a touch.

Craig did have hold of a fish whilst fishing out of Calum's boat but it evaded capture just as he was gearing it up for the net. We made our way back to the hut about 4pm as the light was fading fast. Kenny landed a sea trout kelt from one of the upper pools in afternoon and apart from a couple of offers for Malcolm, that was it for the afternoon.

This was only my second time on the Tay and it was very enjoyable, despite it being a cold January day. I can see why some many anglers love this river. It's sheer size could be quite daunting if you have never fished it before but as long as you listen to the ghillie and fish the likely spots things are much easier. I will certainly look forward to fishing the Mighty Tay again and with spring fishing available at very affordable prices, that time might not be too far away. There is nothing better than getting out fishing again after the close season especially when it's with good company and I am grateful to Andy for asking me down.

Bob updates his own blog about the River Tay on a regular basis and you can keep up to date with how the river is doing by following the link below.
Salmon Fishing Scotland
Posted by DeeDonSalmon at 12:17 pm