During the Deveron Fishing Festival I was fishing the Eden beat which was hosted by GuideFlyFishing. Their representatives were Willie Banks and Jim Fearn. After lunch that day I spent a couple of hours with them just casting some lines. Jim Fearn had a Vision GT4 Catapult set up with a 64ft Rio UniSpey line. He gave me a cast with it as I have a Vision GT4 Catapult and I was very impressed. So impressed I bought the line this week! I managed to get a good deal from an add on the Salmon Fishing Forum classified section. The line arrived yesterday and I spooled it up onto my Hardy Swift MKII. All I needed to do now was go fishing.

Today I tried out the line. It took me an hour or two to get the hang of it but once I discovered the optimum loading point of the line it flew out like a rocket! I spent all day casting with it and getting used to the longer head. The line is White in colour with a 15ft Black loading point. The overall line length is 130ft and has a weight of 750gr(64gm). It has has a long front taper and when I attached a 5ft fast sinking tip it made it even better. The line gripped the surface of the water a bit better and help load the rod. I tried all sink rates of tips and weighted flies. It turned over them all with ease. To me, it's just like a 64ft shooting head without the hastle of having loops of running line strewn over the banks or knotting up in your forward stroke.


Overall impression is this is a fantastic casting line. The black coloured loading point of the line helps to find where it loads your rod to maximise casting potential. I'm glad I have this line in my armoury and it will be very useful on bigger river such as the Dee and Spey where a longer cast can make all the difference. 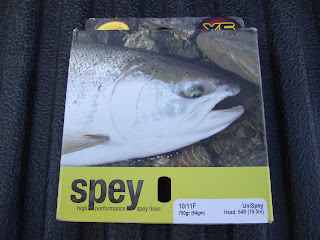 Posted by DeeDonSalmon at 8:38 pm